Kantha has become a very famous name in the world of handlooms and textiles today. However, not many people know that this pattern of embroidery has its root in the ancient India where it was considered to be a major craft among the household women of Bengal.

Kantha is a kind of embroidery craft that hails from the eastern regions of the Indian subcontinent, particularly in the areas of Bangladesh as well as the Indian states of Tripura, West Bengal and Odisha. In the state of Odisha, all the old saris are stacked on to each-other and are later hand-stitched in order to make thin pieces of cushions and various other decors. Kantha saris are further worn by the women throughout the region of Bengal in the Indian subcontinent.

Kantha embroidery derives its name from the word Kantha which means rags in Sanskrit. Thus, this fact reflects that this embroidery has been made out of the discarded clothes and garments. This form of embroidery is considered to be the oldest forms of embroidery that hails from India. To talk more about the origin of this form of embroidery, Kantha’s inception has been traced back to the ancient pre Vedic ages. The Kantha as we have seen today was found as a mention in the 500-year old book, Chaitanya Charitamrita by Krishnadas Kaviraj. All the motifs that are found in Kantha embroidery are mostly the symbols which were derived from the beautiful ancient art. All these symbols are reflective of the natural beauty present in the universe such as the sun, the tree or life, etc.
Earlier, the embroidery included the symbols depicting the natural creations, however, soon the same was used as a medium of religious and cultural significance. The credit of the revival of Kantha throughout the country goes to all the rural housewives of West Bengal who are known to be playing a significant part in the evolution of the Kantha embroidery. It was considered to be customary for al lthese women to make the use of this embroidery in running stitches along the edges. For centuries, the techniques of this art were passed down from mother to daughter and hence the art of Kantha continue to prevail.

Kantha embroidery was continued to be practiced among the rural women of West Bengal, but soon the craft began to fade with the time. It was until the year 1940 that this craft was revived by the renowned Kala Bhavana Institute of Fine Arts which was a part of Vishwa Bharti University in Shanti Niketan. This art was again revived by Shamlu Dudeja in the 1980s when the lady founded Self-Help Enterprise (SHE) that helped to empower women as well as their livelihood by the way of Kantha embroidery.

Today, this form of embroidery has become very popular not only locally, but globally as well. Kantha embroidery has been popularizing itself in the textile and handloom industry. Not only this, the fashion industry, too, has adopted the idea of this embroidery and as a result a number of fashion designers are working under various projects involving the use of Kantha. All credits to the rural women of West Bengal.

Shop – Vintage Kantha Quilts or Know more about our Wholesale.

We provide innovative, well designed products and a unique human experience. While shopping at vintage Kantha Quilts you will not only support the artisan that made the product, but will also connect yourself into a small piece of their life stories through our Blog section. 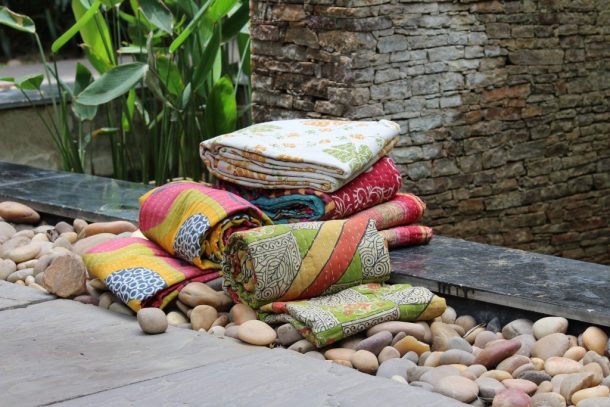 Know about our latest offers & Discounts

You have Successfully Subscribed!